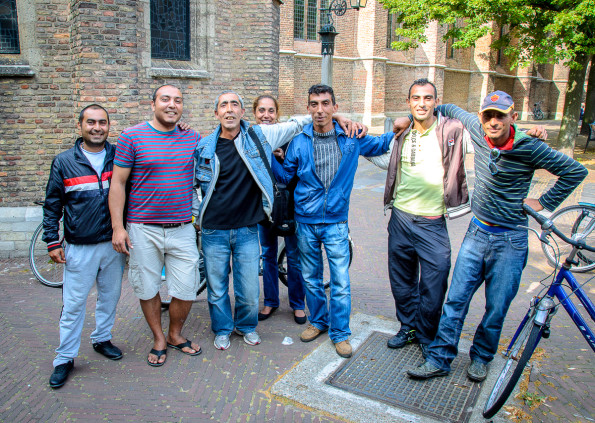 When I was a kid, my brother offered me an intriguing experiment. He claimed he could pull a hair from my head without me feeling it. Being the gullible younger brother, I said, “No way,” but let him proceed. He grasped a single strand, tugged gently saying, “That’s the one. Feel it?” “Yep,” I replied. “OK. Here I go. On the count of three you won’t feel me pull it out. One. Two. Three!”

On “Three,” he slammed his other hand down hard on my head. Despite the near concussion and my anger at his deception, I had to admit it was a pretty clever ruse. Painful. But clever.

Pickpocketing works on the same principle: Distract your target and mask a smaller movement and pressure (the removal of the wallet…or phone) with a larger one (e.g. bumping into the target or say, saddling up right next to him in a friendly photo pose. Just as an example, of course).

So there I am in Delft. I’ve listened to the Serbian musicians play, chatted and laughed with them, taken their photo as they took mine – side-by-side with their leader (third from the left in the photo above). Then, as I walk away, I realize my smart phone is missing.

What would you think at that moment? Maybe your thoughts might run something like this (if you would ever actually admit these to anyone):

And off I walk as fast as I can back to the car.

On the way I think about going back to where the group was performing. But what will I say to them if I do?

“Hi there, fellas. Say, you didn’t by chance steal my phone did you? And if so, could I have it back? No hard feelings. Love your music.”

I’m saved from that by finding they’ve all dispersed…which only furthers my suspicion. All except one. He’s sitting not far from where the group had been playing. He’s casually talking to his wife or girlfriend. He sees me and waves in an ever-so-friendly manner.

Either he’s really milking this scam or he’s as innocent as he seems. I wave back in a half-hearted manner trying to look like either I know what’s going on or I’m just in a rush to meet up with my family. I hurry on, feeling even more awkward about the whole thing.

It takes me almost 20 anxious minutes to get back to my car. All the way there, I’m praying to find the phone, praying for forgiveness for my judgmental thinking, praying not to be so stupid in the future.

I get to the car.

Not only is the phone there, it’s sitting on the console between the front seats where I left it when using it for navigation. Right there where, ironically, anyone could have seen it, busted the window and stolen it.

I want to run back. Find my Serbian friends (they’re friends again, of course, not suspects now) and apologize for something I could never really explain to them without insult and embarrassment.

So I don’t. I simply wander back to where I’m to meet my wife and son. As I go, I think about several lessons from this experience.

First, always be vigilant when you travel. Keep track of your valuables like your phone. Always.

Second, be careful but extend grace. I won’t make some Pollyannaish pronouncement to just trust everyone everywhere. There are people out there that do prey on us tourists. You do have to be careful. But wariness is a tricky thing. The more protective we become, the more it shapes how we respond to people in general, even if they haven’t earned our distrust. We close ourselves off to the very people we’d often like to meet.

Interestingly, the more we do the first point – be vigilant – the easier it is to do the second point – extend grace. When we know where our stuff is, we have less to worry about. Even better, the less we’re lugging around with us, the less we need to protect.

Each situation will be different. Sometimes wariness is the right response. But for me, I will try to err on the side of trust. What I found is that you lose more than your phone when you stop trusting people. You lose a little bit of your own humanity.

I can’t afford to lose that.

Read Part 1 if you haven’t yet.