You can go back, but…

Let’s revisit the idea of a re-visit, shall we?

A re-visit is when you go back to a place you’ve visited before. Sometimes, that can be rewarding because you see details or new elements of the place you missed the first time. Other times, it can be disappointing because the wonder and novelty you associated with the place the first round no longer exists. It’s like watching a rerun of your favorite show.

Rerun. When’s the last time you heard that term? I can’t recall when I last saw a rerun of a television episode. I don’t watch enough network TV for that to happen nor am I forced to watch reruns because of a lack of other viewing options, what with Netflix, Amazon, iTunes or others. In short, we have so many other new shows available on demand now that we don’t have to go back and watch even old favorites.

But we still do.

Similarly, we often revisit a special place, somehow convincing ourselves that we can still have that original, magical experience.

So, how was that rerun?

I should talk. That form of denial or misplaced hope may explain why last summer we visited the town in Germany where I spent my junior year in college. The city is Freiburg, located in the heart of Germany’s Black Forest. Initially I tried to avoid going back there – I did try – but then my sons thought it would be fun to see where Dad went to school. Oh, why not? What’s the harm? So back to Freiburg I went, family in tow.

As we approached via car driving in from the East, I found myself remembering places and I found the surrounding countryside even more beautiful than I had recalled. Maybe this will be a good experience after all, I mused. But once we got into town, two things happened that reinforce my belief that revisiting certain places may not lead to the most meaningful of experiences. 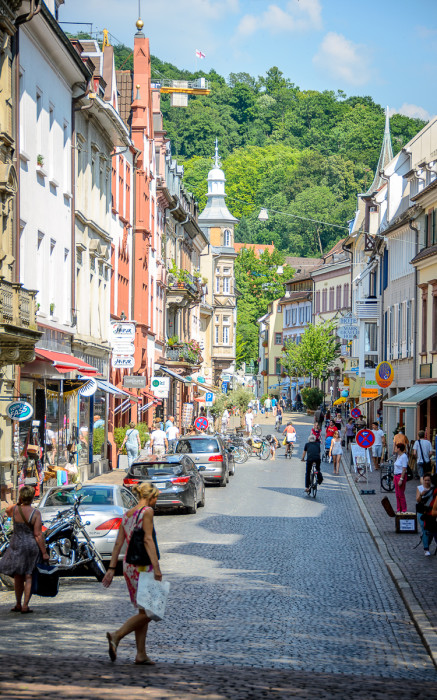 First, the city both had changed and it hadn’t. How’s that for insightful? What I mean is that much of it was familiar. I recognized many of the streets (like the one above) and even the buildings such as the old city gate with the McDonald’s sign on it.

In the same way, the Muenster, the Romanesque Cathedral in the heart of the city seemed familiar. 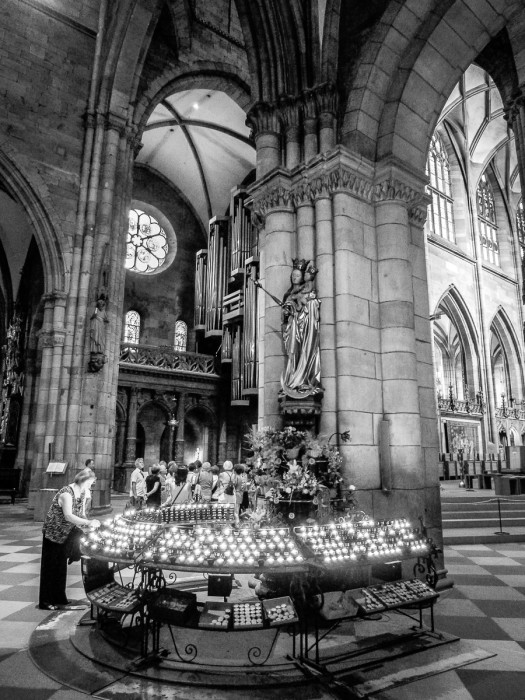 I have to admit, however, that I never noticed this, uh, well, unusual gargoyle before. 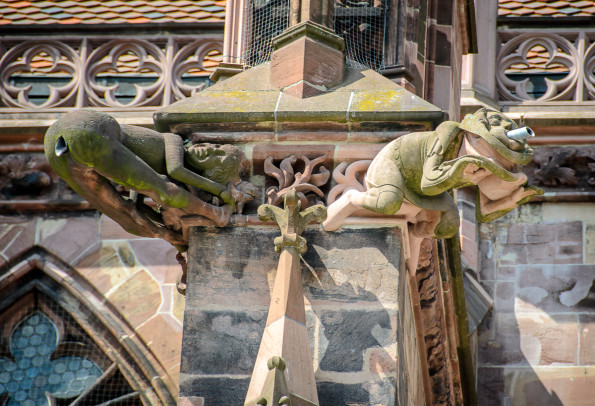 Yet even what I recognized as being the same, wasn’t. Not exactly. For example, many of the walls around the town, once so quaint and historic, were now covered in graffiti. It was like visiting Disneyland and seeing trash all over the place.

Second, I had both changed and hadn’t. So instead of viewing Freiburg with fresh eyes, I came with this bundle of hope and nostalgia, recollections about the place, the people I’d known there and even who I was then and who I am now. The problem was, I couldn’t see the place for its own sake. Instead, I kept making comparisons which rarely comes off well: No one likes to date someone who is always comparing you to their past flame.

Does this mean you should never revisit a place? Of course not. And is Thomas Wolfe correct that “You can’t go home again” meaning you can’t return to the places of your youth to relive them? On that, I’m not so sure. Perhaps you can. But you need to do so with your eyes wide open knowing that those eyes may be seeing much more…or much less…than is actually there.