It all seems the same

I have this friend whose taste in music pretty much coincides with the popularity of bell bottoms and the culturally appropriate usage of the word, “Groovy.”

With the exception of maybe a few later Neil Young and Grateful Dead albums, his perception is that nothing good in music has been created post Watergate.

The funny thing is, when I play some more recent albums for him, he doesn’t say, “I don’t like that.” Instead, he condemns the current music with a casual, “It all seems the same.” He detects – or claims to – no discernible difference between The Black Keys, Mumford and Sons, Switchfoot and Vampire Weekend. I guess they all have male singers and guitars, ergo they all sound the same.

I find it much easier to be baffled by my friend’s rather limited taste in music than to examine areas of my own life, but alas, I too have plenty of closed doors when it comes to the unfamiliar. I once read an art history book which captured it best. The author commented on how most people, when confronted with contemporary art reply, “I don’t know art, but I know what I like.” The author noted that a more accurate statement would be, “I don’t know art, but I like what I know.”

We’re all that way to varying. We like the familiar. How much we’re willing to embrace something new has to do with our sense of openness, or, as psychologists call it, our “openness to experience.” As Wikipedia defines it, openness to experience “involves active imagination, aesthetic sensitivity, attentiveness to inner feelings, preference for variety, and intellectual curiosity.” To me, it’s really about how willing you are to try something new.

Some people are always open. Others, rarely so. The majority of us are somewhere in the middle. When it comes to popular music, my friend is about as open as an NSA report. 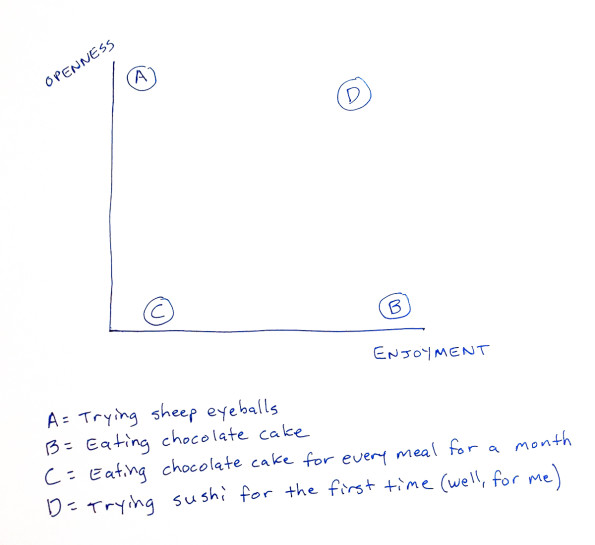 So what about you? How open are you to listening to new music? Trying new food? Visiting new places? Meeting people who may be very different from you?

Why it matters is this: Without being open to the new, you may never discover what God put you on this planet not just to accomplish, but to enjoy. That may sound like a grandiose statement, but I think it’s true. I think a lot of people  go through life and miss their true lives by not being willing to stretch beyond the familiar.

What’s the number one regret people in their later years of life have? That they didn’t take more risks. They didn’t try new things.

Don’t wait until you’re too old to try something new. Practice openness. Do something different this week, whether it is taking an alternative route to work or school, trying a new dish, listening to a new music station or talking to a stranger. Just try it. Be open.

Because when you do, you may find something very curious about your life.

It doesn’t seem the same.