The one less traveled – Part 2 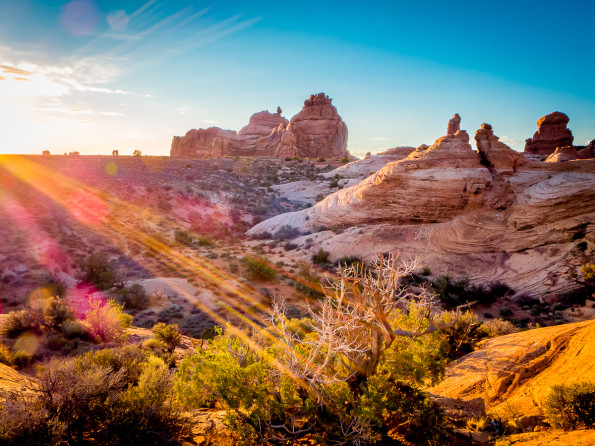 Last August, I accompanied my son, Sumner, on a cross-country road trip to the Midwest. Destination: school – he was about to start college in the southern Midwest. This was a trip of logistics, a relocation of him and everything he will need for the next four years, to a place far from home.

But that didn’t stop us from making it a fun journey.

We planned our route in ways both spontaneous – we made no reservations – and yet intentional: we timed our travel to get to one stop, Moab, Utah, in the late afternoon.

The reason for this orchestration of time and place was so that we could experience Arches National Park (just outside of Moab) at sunset. We arrived in Moab a bit later than planned, dropped off the better part of Sumner’s worldly goods at our budget hotel, grabbed a quick dinner and raced the descending sun to Arches.

We’d been here on a family trip about five years earlier, so the layout of the park was familiar. Our plan was to hit a few of the major arches, then drive to the trailhead for the two to three hour roundtrip hike out to Delicate Arch which we’d missed on our previous visit. The latter is the poster child for the park, the one you see in all the promotional photos. It looks like how the St. Louis arch would appear if made out of Play-doh by a three-year old.

We never made it to Delicate Arch.

We stopped initially at “Park Avenue,” an area of skyscraper-like rock formations, then headed to Double Arch passing by Balanced Rock along the way. But as we left Double Arch, we found a stretch of rock bathed in the warm orange of that rapidly setting sun. We stopped, parked off the side of the road, and, being thoughtful visitors, avoided stepping on the desert vegetation on our way to scramble on  huge mounds of sandy reddish rock.

We were two kids delighting in this massive playground. At one point we looked at the time and realized that if we left right now, we could still make it to Delicate Arch by sunset. We figured that if we got there, we’d see something famous – the arch itself – but we’d also encounter numerous other visitors.

Where we were – picture two small insects meandering across the upper belly of a huge stone version of Jabba the Hutt– we saw no arches or any of the named sights of the park. But neither did we witness any other human beings. We stood, ran, climbed and exulted  in our private corner of this national park. And so we remained there.

We had chosen the way less traveled. 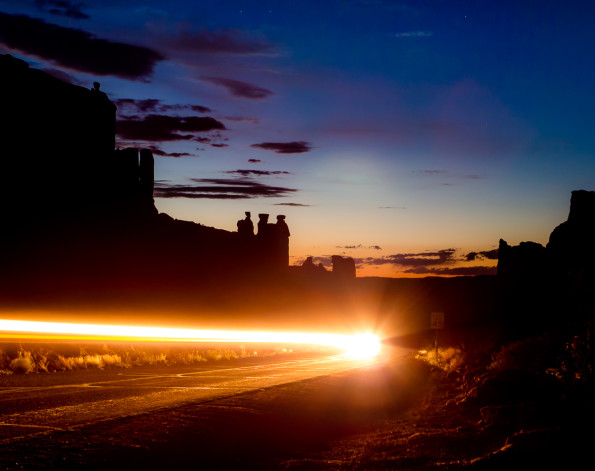 We missed Delicate Arch at sunset. We also missed all the crowds. Instead, we gained so much more in small yet meaningful ways. The photos here show the view from “our” rock followed by some fun on the way out trying to capture images of the park in the dark.

We didn’t have THE experience of Arches. But we had OUR experience. 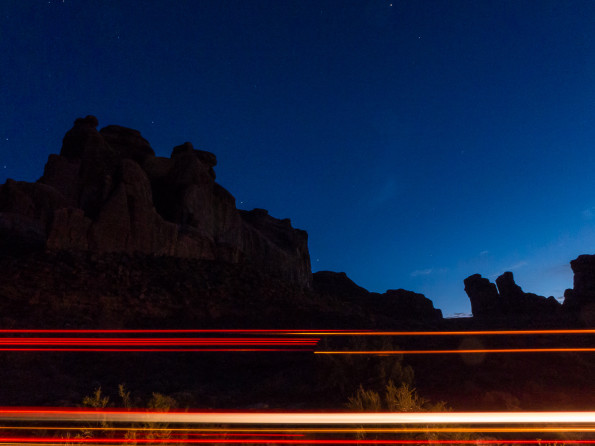 That may seem like an obvious choice, but the siren call of the popular cries loudly when you’re faced with the fork in the road. Go with the well-known or march off the map. It’s easy conceptually to say, “Well of course. We should always go our own way, blaze our own trails, etc.” But in reality, I’ve done that and I have missed out on some things I wish I’d seen instead. So the choice between the way most traveled and that which is least traveled isn’t as easy as the Frost poem might lead you to believe. It does require wisdom when choosing.

But here’s what I was reminded of that evening in Arches: if you choose with the right mindset (in our case, opting to spend time together, father and son in our own beautiful spot rather than running feverishly to see what others have deemed beautiful), then there likely isn’t a wrong choice. 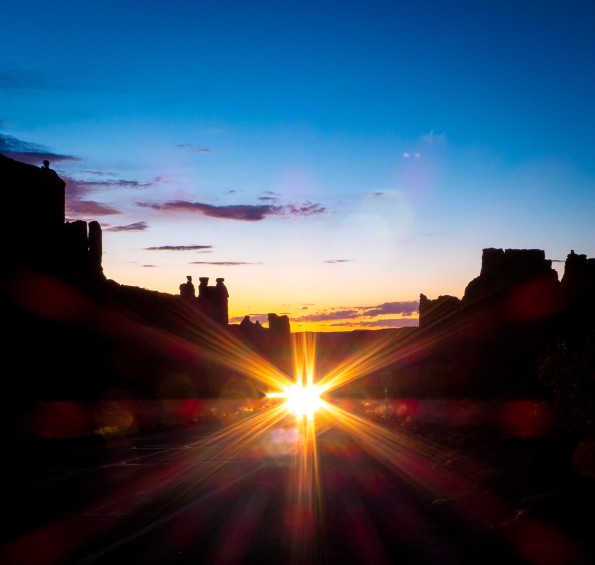 The important point – the heart of meaningful travel, actually – is to recognize or focus on what you have rather than what you miss.

We may have missed Delicate Arch, but we came away with this powerful reminder from that trip:

There will always be other paths, some more traveled, some less. But if you are content with the one you choose, that will make all the difference.