Shortly after having the mystery of the swerving bicyclist resolved by the sight of the little gray and white dog that followed him, we came across this bridge over the Main River in Frankfurt, Germany. 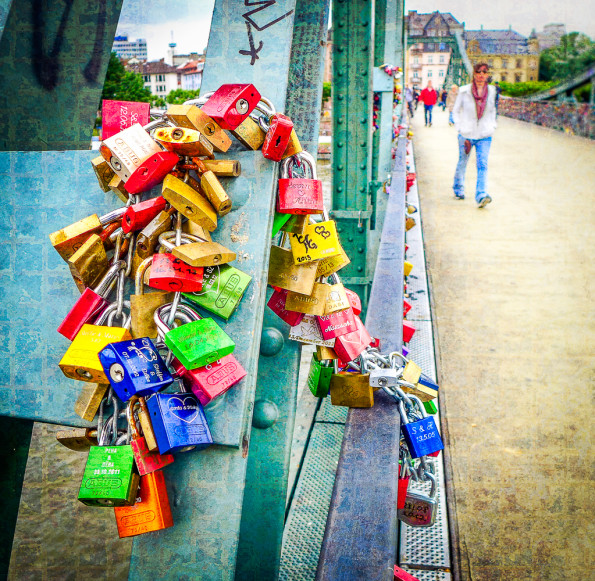 The locks you see attached to the railing follow a trend started in Paris on a bridge over the River Seine. Couples write their names on the locks, attach them to the bridge, then throw the keys into the river to signify their undying love and commitment. In Paris, they get so many that they have to remove the railings every six months or so to keep the bridge from collapsing. My guess is that many of the locks outlast the relationships, but that’s another story.

Today, these locks remind me of a different kind of relationship.

We decided to visit Frankfurt on this vacation to Europe for one reason: to see the couple that have been family friends of ours for longer than I’ve been around.

I say “friends” but they are more than that. They are a couple, now in their 80’s and 90’s that my aunt and uncle first met in the 1950’s when the husband worked as a driver for one of the major car companies in Europe. He escorted not only my aunt and uncle but diplomats, business people and even famous actors all over the continent before opting for a more settled way of living with his wife in the 1960’s.

I spent my junior year in college, studying in Germany. Before classes began, I stayed with this couple for several months. Some of my best memories of that time in my life revolve around them. Now, decades later, my wife and two sons and I get to spend the day with them. We catch up on the present, remember the past and realize that, at their age, how uncertain the future seems.

We talk and talk. Later, we take a break in the afternoon to let them rest. That’s when we wandered along the river and saw the bridge, the locks, the bicyclist and his little gray and white dog.

During our conversations with them, we cover a range of subjects. At one point in our talk, I make, what I assume to be a mere statement of fact. I tell them that when I explain to friends at home why we’re in Frankfurt it is to visit, “my German parents.”

Simple words. An innocent phrase that is already familiar to me through usage at home. But to them, this is the first they have heard it. To them, it means much more than a mere description.

The wife tears up. She walks over and stands behind her sitting husband. She grips his shoulder. Leans in close so he can hear. Repeats the words just to be sure, “He said we are his German parents…” Together, they just nod for several silent moments. She then tells me the story of the son they had, born not long after I was. The son who died shortly after birth. Their only child.

“We are his German parents,” she says one more time to the husband. The fullness of her meaning is lost on none of us.

Because of the geographic distance and their advanced age, I don’t know if this is the last time we will see each other. The thought pierces and saddens me. Yet as I reflect on that, I know that our time together was enough.

Enough to say what needed to be said. To convey emotions always felt but never before overtly expressed.

We don’t always get to see the end of the story. On too many trips we’re left hanging and we have to trust God to complete what we cannot. But sometimes, as on this day, we’re given a gift.

Sometimes, we get to see the full story, be part of it. Tie up the loose ends. Experience completion.

Sometimes, like today, we get to see the little gray and white dog.

If you haven’t yet, you should check out Part 1 and especially, Part 2