Trips abound with incompleteness. You see something, you wonder what it means or the history of a place or the connection to you or others and then…viola! You’re gone. Off to someplace else. You don’t get the full story because you’re only in a place for a snippet. You drift through a part of a narrative whose final page you will likely never read. 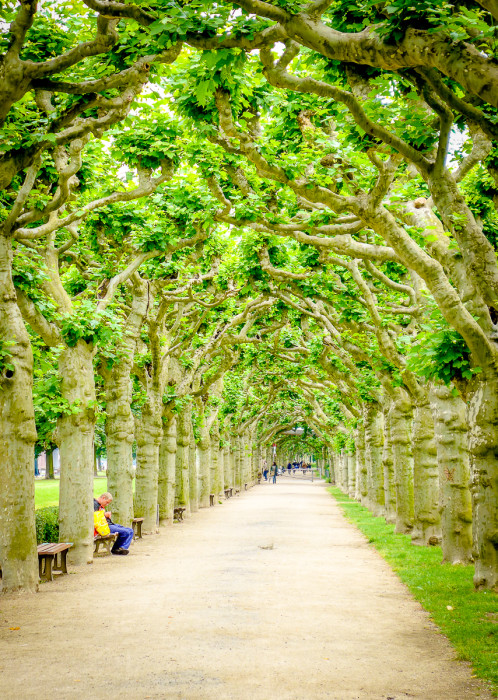 I’m in Frankfurt, Germany this summer with my family. Most people visit Frankfurt for work or for its airport, just passing through. It isn’t high on tourist destination lists for its scenic content which is a shame since, as we found out, some areas are exquisite. I think it gets a bad rap from the past but much has changed even in the last few decades as Frankfurt has continued to transform itself, in this case into a very green city (in every sense of the word).

Like most major cities in Germany, Frankfurt was pretty much leveled during WWII. Each city was given a choice after the war: rebuild the way you were or the way you want to be. Recreate the past (as cities such as Dresden or Munich have done) or start from scratch. Frankfurt’s a scratcher. All modern and shiny. And now, green.

I was here in college, staying with the friends who have become the reason we’re here now. But this is a very different city even from when I was here last. I expected the high rises and German-engineered buildings of bright metal and glass that reflect the city’s status as the financial capital of Europe. But I didn’t expect the trees.

The friends we’re visiting (more on them in Part 3) live only a few blocks from the main river in town which, conveniently, is called the Main River (alas, pronounced like “mine”). Down along the river are a series of beautiful promenades lined by pollarded plane trees that, in summer, form an arch of gnarled branches and leaves above the pathways. The photo above shows a typical stretch of the promenade.

So here we are, ambling along this pathway under these lovely trees, and suddenly a man rides past me on a bicycle. That may not seem unusual until I tell you what he was doing.

You see, that’s my point: You don’t always get the full story, on a trip or even here at The Meaningful Traveler. Sometimes you’re left hanging. Often you never find out what happens.

But assuming I’m still alive and writing next week, I’ll tell you then. The full story.

Or at least the next part of it…