I’m in Louisbourg, the recreated 18th century fort on the island of Nova Scotia, Canada. I’ve seen many of the reinactors throughout the day, especially those playing the role of soldiers as in this photo. 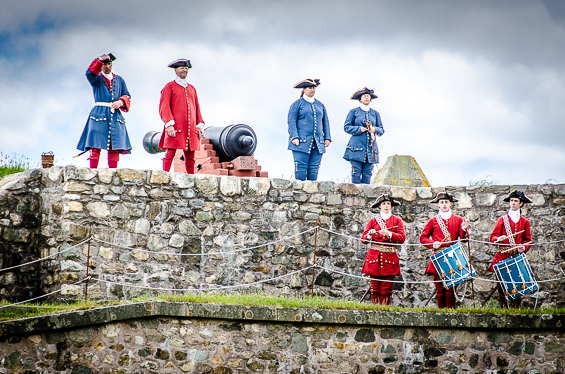 Except for the modern-day spectacles on a few of the actors, nothing seems amiss.

Until I look more closely.

Actually, I didn’t look very closely when I took this next photo. I just liked the composition of the posts and the soldier leaning against the wall. 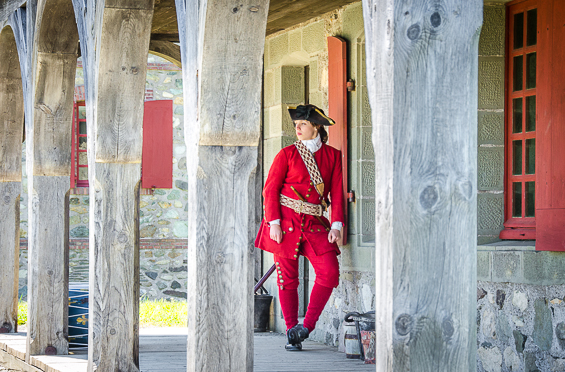 But after I snapped the shot, the person playing the soldier smiled at me. This actor, I gather, is used to being photographed. After all, that’s part of what they are there for. But when I saw the soldier smile, as small a thing as it is and as weird as this may sound, I had a bit of a shock. A surprise that bordered on wonder.

Wonder and surprise are interrelated. I’d say that surprise, in many cases, is a mild form of wonder. We can be surprised by something new or just by the suddenness of encountering something unexpected. And such was the case here. For if you look at the soldier closely, that isn’t a guy (as you would logically expect since in the 17oo’s I seriously doubt any soldiers were women).

She had this beautiful smile because she was a beautiful young woman dressed in this soldier’s outfit. Because I didn’t expect it, it threw me for quite a loop. Why?

First, I was embarrassed because she was aware of my taking her picture. That seemed to be fine because she continued to pose for me afterwards (though none of the other photos were as interesting). Still, I felt as if I was busted, like staring at a person you don’t realize you’re staring at until they give you a quizzical look.

Second, I had this fleeting feeling of being back in high school around a pretty girl and not knowing what to say. Silly, I know, but I was so taken aback that I was rather tongue-tied.

Third, I was surprised that I was surprised. By this I mean that I couldn’t believe I hadn’t noticed earlier that this soldier was female. How could I have missed that?

Thus, the real wonder (if we can really even call this wonder) came as a combination of factors all caused by a single surprise. But because of this, if you ask me about that day now two years later and you inquire as to what stands out the most, I’d say it was this odd moment taking a photo of a young woman dressed as a soldier.

I’m learning to be OK with not having explanations for everything we think or feel or experience on a trip or at home. Even small moments of surprise. I am learning to just accept them even if I don’t understand them and be thankful for wonders, both big and small.