The photograph we looked at last time told a story of the simple childhood joy of jumping from rock to rock without falling into the water. What made it a memorable image was the little girl in the photo.

Having people (preferably not posed in rigid stances with fake smiles) in your photographs almost always makes the images more interesting. They add a human element, provide a focal point and often, can lend a sense of scale. Their expressions, gestures or positions can tell the story all by themselves. The surrounding scene, in those cases, serves merely as a contextual backdrop.

Having said that, take a look at this image shot not that far from either the first photo in this series or the second: 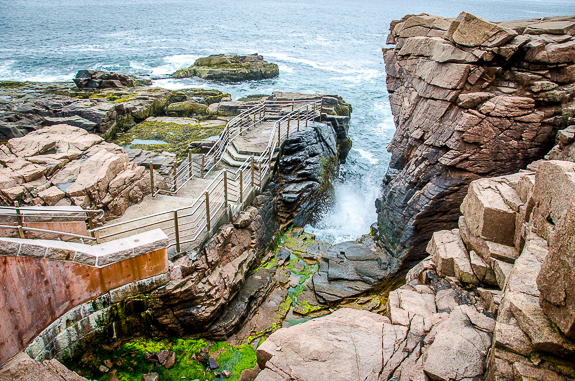 Hmmm. No people. What’s up with that?

First, of all, the ocean (which should give you a further clue as to where this might be) was pretty boisterous on the day we were there. And when the waves came thrashing into this small rocky inlet, they sent up quite a spew of foam and spray. No one there that day wanted a salty shower.

Second, sometimes having no people in the photo tells a story in itself. You can see the stairs and railing, so you, the viewer, know that this spot was intended for human visitation. Yet no one is there? It makes you wonder, perhaps, why that is.

Third, the reason I like this photo without people in it is that it makes it more of a study in shape, texture and color. This image still works in black and white due to the leading lines and the rocks. See what you think: 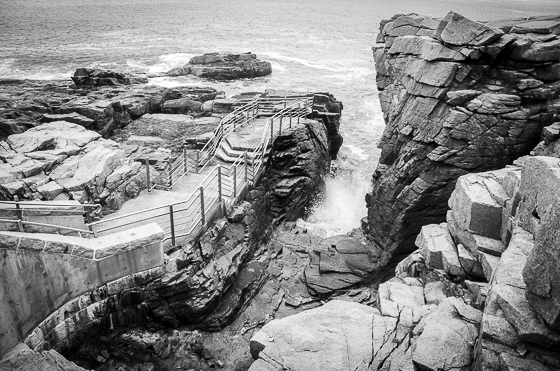 I like the black and white, but it tells yet another story. It has a different feel than the color. I love black and white images in general, but with this one, I like how the bright green sea moss contrasts with the color of the water and the rocks. It feels a bit more inviting and less less intimidating than the black and white version, even without people. At least that’s how I read it. But what about you?

With your own images, remember this: When you’re trying to communicate with your photos, human subjects in the frame can help. But sometimes, you can tell a better, or at least a different, story when you leave people out and let the scene speak for itself.

Any guesses where this was taken? If you’ve followed this series so far, you’ll know that there’s a fountain in a town, next to a park with a lake (actually, many lakes) that also, per today’s photo, is by the sea. Where in the world…?