On the other side of a hard trip

The poet comes home from a long day working with kids who value the power of words as much as they do leafy greens or dental floss. She peruses the fridge and settles for some unmemorable leftovers. When did she make these? She lets that thought drop.

She extracts a glass from the drying rack by the sink, uncorks the bottle and pours herself a healthy serving of what she calls her “word juice.” She hurries through her meal, replenishes her red wine and cradles the glass in both hands as she saunters all of eight feet to her computer.

The words begin to flow.

The businessman has wrestled for a full week on how to close the deal. He can find no way for their firm to deliver the project on time with the additional requirements from the customer. The workout at the gym helps unknot the growing tension, but still he feels stuck, stymied. The customer needs an answer by 10:00 a.m. the next morning. He’s got nothing.

In the locker room, he undresses and steps into an available shower. The hot water streams over him. He just stands there. Eventually, he reaches for the shampoo, more from habit than conscious volition. His hand never makes it to the dispenser.

In a flash of inspiration, he’s solved his problem. 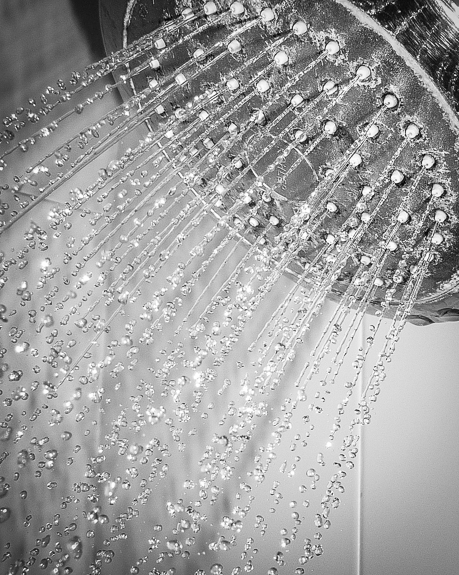 Does alcohol make us more creative? And what is it about a hot shower that seems to foster these moments of insight and revelation? Do we just think better under these influences?

The reality is not that we think better. We think less.

The sedative nature of both the wine and the warm shower still the competing thoughts and voices that rage through our minds most of the time. We live in a world of distraction and so-called multitasking. Too many issues vie for our limited attention. As a result, no one thought gets the focus it needs until we quiet our minds.

Alcohol and hot water flowing over us will do the trick sometimes (but not too much or together, otherwise you end up passed out and looking like a prune on the floor of your shower). But so will travel.

I love the line in the movie “180 Degrees South” which chronicles the journey of a young man who sails down to Chile in order to eventually climb a mountain in Patagonia. The narrator is told that the word “adventure” is misused by most today for, “It’s not an adventure until something goes wrong.”

On hard trips, something – possibly everything – goes wrong. They aren’t much fun at the time, but they make for great stories later. Yet another benefit of a hard trip is that in the immediate aftermath of the difficulty, you’re left almost numb.

All the worries and concerns, even dreams and ambitions, get silenced because you don’t have the mental energy to contemplate anything more than what lies before you. Presence is delivered with garnish on a plate and served to you whether you ordered it or not.

I’ll give you an example next time from my own recent trip, but how about you? Ever had a trip or hard situation that left you so stunned or grateful to be alive or exhausted that immediately afterwards everything around you seemed more real?

I have some friends who have faced life-threatening illnesses and each of them says the same thing: After something like that, you see life differently. You value each moment more.  You become more focused.

Hard trips can do the same. They just require a bit more planning and endurance than a hot shower…