When your trip goes awry – Part 3

To recap part 1 and part 2, I’m at an airport in the Midwest.

My first flight on Delta out of here was cancelled due to mechanical issues. My so-called rebooked flight on American didn’t happen since they said the reservation wasn’t confirmed. I’m having uncomfortable flashes of the Tom Hanks movie, “The Terminal…”

I jot down some questions in my journal: What is God trying to teach me? Is this a lesson in surrender and trust? But even amidst the concerns, I sense that He goes with me, knows how I feel and most importantly cares about this whole fiasco. I’m not alone in this.

I decide to walk back to the Delta gate, another attempt to do something even if I’m not sure what I’ll say once I get there. I’m telling myself to be grateful even if that’s not how I’m feeling.

And then I look up and see this sign: 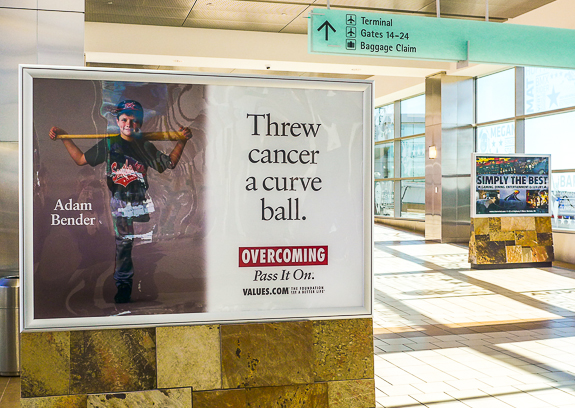 I stop and take a photo (not a very good one due to the glare). I know it’s not an accident I’m seeing this. I smile about the old adage regarding the guy who complained he had no shoes until he met the man who had no feet. I’m whining about a cold and a few extra hours in an airport. And here’s a photo of a little boy who has lost his leg to cancer.

Just as the impact of that starts to hit me, the phone rings. My travel person has booked me on a United flight. United? That’s not part of Delta’s network. She doesn’t care. She will make it work with Delta. Despite her normally sweet disposition, you don’t mess with my travel person, especially when she feels an injustice has been done.

I can only tell her for the I-don’t-know-how-manyeth time today, “Thank you.”

I head to the United gate and camp out there. Eventually, two gate agents arrive carrying on an animated conversation. I rush over. One barely glances my way but I take that as a signal to launch into my tale of woe. Neither care nor really seem to be listening, although the closest one taps on the computer even as she continues her conversation.

“Well, I don’t think he should have been allowed to change shifts like that!”

“There’ve been issues with him before. I remember when…”

the tapper reaches down, without seeming to take her eyes off her colleague, grabs a boarding pass from the printer below the counter and hands it to me. She does this all without missing a beat in her conversation. I will never be genetically capable of multi-tasking like that.

My thank you goes unheeded but no worries: I have a boarding pass! My sudden endearment for this stiff piece of paper makes me understand why people kiss the tarmac when they land after a grueling escapade abroad.

As I wait for my third flight out of this airport today, I still feel a bit like crying. Not out of frustration or disappointment this time, however, but out of gratitude. But that emotion is fading quickly.

In an almost sinister way, I feel the hard traveler’s edge returning. I’m starting to move beyond crisis back into routine. Even now, less than an hour after first being told I wasn’t on the American flight, I’m wondering why I was so worked up about it.

I’m glad I’m calmer. But I’m not so sure this tendency to shut down and return to a business-like approach to travel is such a good thing. I don’t like feeling raw, but neither do I like not feeling anything.

I would ponder this day more but I’m neither capable of making sense of it yet nor do I have the time. For even as I consider running and grabbing some lunch, I look over and my two talkative gate agents are now in full on boarding mode.

I have rarely wanted to board a plane as much as I do this one.

I find my seat and give thanks that this seems like I’m actually going to get out of here.

Or so I think.

If you haven’t yet done so, check out Part 1 and Part 2