A remembrance of things present – Part 2

So what two things changed to help me rediscover and better appreciate my old ten-speed Motobecane touring bike?

So many of life’s most transformative moments occur in the course of carrying out these two simple activities.

First, the trip. My family and I traveled to Whistler, British Columbia this summer. Amidst the discovery of places like HemLoft and Train Wreck, I spent part of each day mountain biking. 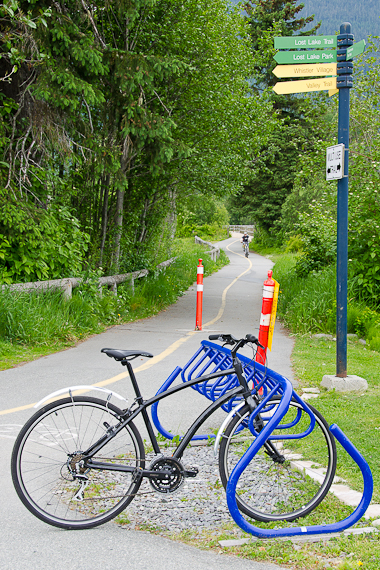 I did so initially because my teenage son, Sumner, was so excited to ride the many marvelous and world-renowned bike trails in and around Whistler. I wanted to share in his enthusiasm. So each day, I rented a different mountain bike with the thought that if I liked the sport, I’d have a better idea of what bike to one day buy myself.

I’d been mountain biking a bit before, but on an old garage-sale bike that was too small for me and thus about as enjoyable to ride as fish oil is to drink. But when I got to Whistler, I realized that my previous experience on a mountain bike compared to my current one about as well as the music quality of an AM station on a transistor radio stacks up against state-of-the-art surround sound.

I had been practicing on my son’s bike before we left for Whistler to avoid the inevitable pain in places you don’t want to talk about when you haven’t ridden a bike in months. But it still took a few days to warm up leg muscles that somehow don’t get used on a stationary bike at the gym. Then, after that, something magical happened.

When I was a kid, I never delighted in riding a bike. Sure, I appreciated how much easier it was to pedal my Motobecane over my old Huffy, but my focus was on transportation not pleasure. In Whistler, it was exactly the opposite.

I remember the precise spot when it happened. I was leaning into a berm on one of the many Lost Lake singletrack trails. When I straightened out, I suddenly had the sensation that I was doing more than riding a bike. I was gliding through space.

Anything I write here to explain that moment will likely sound corny or cliché. I’ll only note that my awareness of the experience shifted. All the minute details of balance, motion and self-propulsion came alive. The entire experience of riding changed from that point on. It was more than just the fun of racing downhill over roots, rocks and banked turns. I became aware of the sheer joy of movement in general.

I had a similar experience once while snorkeling off the northwest coast of Oahu. I had been pursuing a sea turtle underwater. When it swam off more swiftly than I thought possible, I sensed my own movement through the ocean. I seemed to awaken to each muscle and action. It felt as if I could swim forever without tiring – reach, pull, reach in an ongoing rhythm of delight.

I was fully attuned to my body, my breathing, the water and all that was around me, keenly aware of the very act of swimming itself, probably (at least to that degree) for the first time in my life. We take for granted and ignore the most basic blessings until in moments like this when we’re blown away by the simple motion of a body moving through water.

So it was on the mountain bike. That day and each day thereafter, I would have episodes of pure exhilaration, not due to the speed or terrain but just because I was riding a bike. I can’t explain it any more than that, but if you can remember that first day as a kid when you rode a two-wheeler on your own – no help, no training wheels – you’ll have an inkling of that feeling.

The photo above isn’t of a mountain bike or one of the many singletrack bike trails. But it does show you one of the many bike paths in and around Whistler that also contributed to that inexplicable joy of simply riding, a joy that only came about by taking a trip.

You can read Part 1 here or Part 3 here