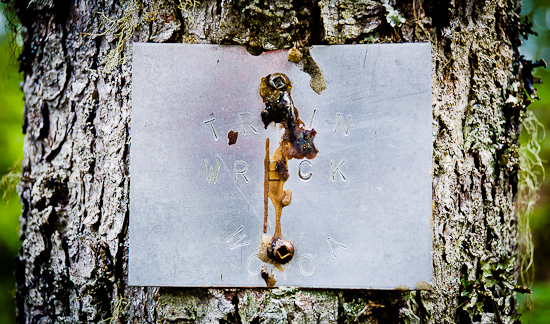 To me, trains are like large farm animals: oversized, bulky and rather mundane. They’re something you pass by occasionally and notice peripherally (if at all). They make loud, rumbling noises we imitated as children, noises that we ignore as adults due to familiarity unless they are unusually close or loud. Same goes for their smells.

But with both, if I stop and take a closer look, I find them remarkable. Their bulk commands respect. Their details – the gentle yet wary eye of a cow or the bolts on a train’s brake wheel – evoke curiosity, even appreciation.

Thus, when I heard about Train Wreck near Whistler, BC, I considered it an opportunity to take a closer look at something potentially unusual and possibly intriguing.

I had heard that the six derailed cars were covered in graffiti so I expected to find rusted hunks of metal covered with gang tags, obscenities and spray-painted pronouncements of young love. But as my son Sumner and I made our way down the railroad tracks and discovered the side trail leading to the site, we found something very different. 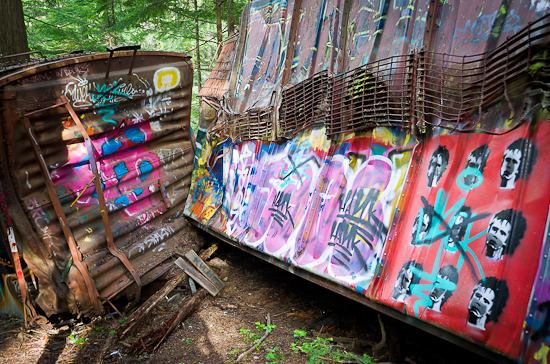 Large, rusted and bent containers lay strewn around the area so haphazardly that they’re location seemed, paradoxically, almost intentional. But more than the wrecked train cars themselves were the embellishments added to them in two forms.

First was the graffiti. I use that term loosely for here, much of it was art. We saw minimal profanity or vandalism compared to walls and train cars at home. Instead, we found some beautiful designs, often quite humorous, rendered in multiple colors on the faded rust red sides (and interiors) of the box cars.

Second, the whole area had been transformed into a mountain biker’s dream. British Columbia has become world famous in biking circles for its homegrown variety of woodland architecture: boardwalks and runs, ramps, jump platforms and a host of variations on the log run collectively referred to as “skinnies” (picture riding along an elevated 2X4 and you get the general idea). This whole area was covered with various runs and ramps, the most astonishing being ones on the top of the boxcars themselves. 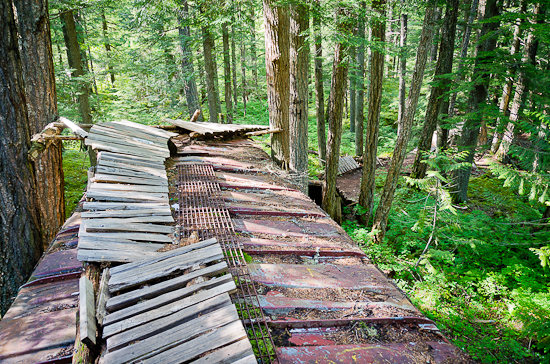 We found out afterwards that a few years earlier, this place had been used for a photo shoot with the wooden platforms built for stunts as part of the production. Some of them have fallen into disrepair, but the overall effect was still fascinating. In fact, it has the feel, much as with HemLoft, of something out of the old computer game, Myst. 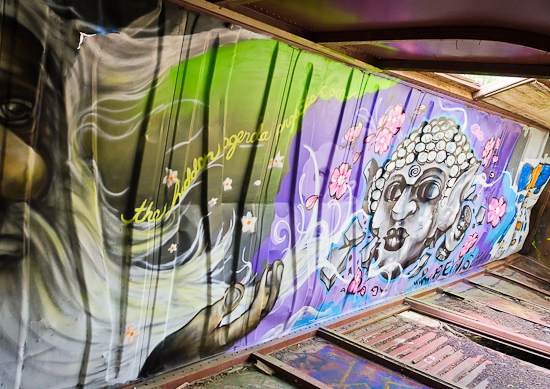 As we wandered around the wooden structures and bent metal cars, we joked about how much it seemed like a fantastical woodland enclave. We half expected to find a Gandalf-like character pop out of one of the train cars with a can of spray paint in his hand, shaking it in that clickity-click-click manner and asking if we think the neon orange he has just added to the bent train ladder is the right shade. 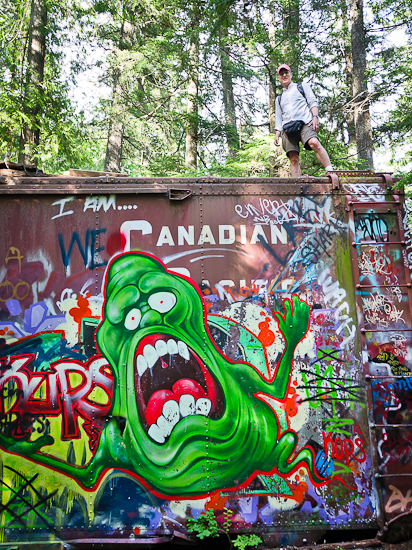 I came to realize that the secret of Train Wreck isn’t really its location. It’s not easy to find, but neither is it as hidden away as HemLoft. Instead, the secret allure here is that what you uncover isn’t at all what you expected.

We came looking for the wreckage of the past and found that the efforts of numerous hands here in the present has transformed Train Wreck from a disaster site into a funky yet intriguing work of art.

Read about the journey to Train Wreck in Part 1