The allure of secrets: HemLoft – Part 2

I am haunted – no, make that taunted – by the initial hints regarding HemLoft, the secret treehouse near Whistler, British Columbia. What started as a mere topic of idle conversation now becomes a quest.

When I worked as a professional magician in college, I often found that people wanted to know how a trick was done not because they cared about the illusion itself. Instead, they sought the secret simply because it was secret.

I am no different. And so I begin asking the people at the place we’re staying what they know about HemLoft. Here’s what I learn:

Finally, I get a real tip: HemLoft lies near a particular switchback. He’s not sure exactly where, but I have enough to get me started.

So one morning while the rest of my family is still awakening, I head out. In many ways, I feel as if I’m geocaching (the hunt using a GPS and coordinates to find hidden boxes of “treasure” (simple toys or items that others have deposited there)). The only difference is that this time I have no GPS and the cache is much, much larger than a bread box.

I drive to the area but all I see is the street before me and miles of trees. If HemLoft is here, it certainly isn’t visible from the road. I continue slowly to the top where I find million dollar homes in various stages of construction. But no HemLoft.

I turn around and think through the logic of the place and where it could be. In so doing, I come across something I had missed before: what appears to be a very faint disturbance in the embankment off the road. I find a wide spot on the shoulder of road and park, ignoring the signs posted everywhere that you must have a pass or you will be towed. I figure I won’t be long enough for that to happen, or so I hope.

I clamber up the embankment and then, with a smile of delight and satisfaction, I discover a small trail at the top leading into the woods. Still, there is no sign of any treehouse or similar construction. Just trees and, up ahead, a wall of rocks.

I hike to the left of the rocks, following traces of foot prints. Up, up the hill I go, peering down for trail signs while periodically looking upward for hints of tree-based habitation. Nothing.

I wander around some more then figure this can’t be the place. I turn back but decide to do so following a different route. And that’s when I see it.

Not HemLoft or even a building. But a blue tarp. There in this forest is a blue tarp. As I approach it, it appears to be covering a length of 2X6 wood. The type you would use in construction…say, of a treehouse…

I pick up speed and as I come over a slight rise in the hill, I look up and there it is, as if it had been before me all along. On a lone tree surrounded by others sits a spherical structure. 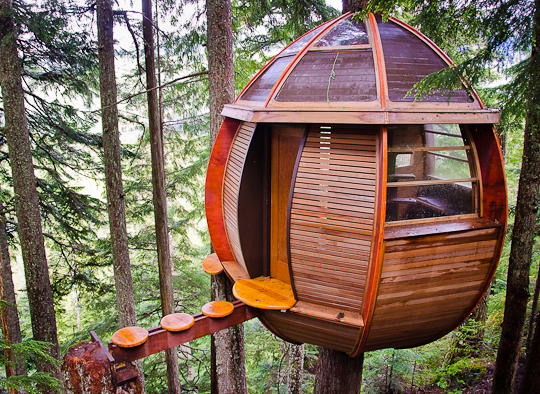 I look around briefly on the outside but then, warily, I cross the elevated steps (a dicey proposition given that they are six or so feet off the ground and wet from recent rain) and come to the door. I knock, feeling a bit silly at the action given the isolated location, but still not sure about the rules of etiquette in secret forest treehouses. 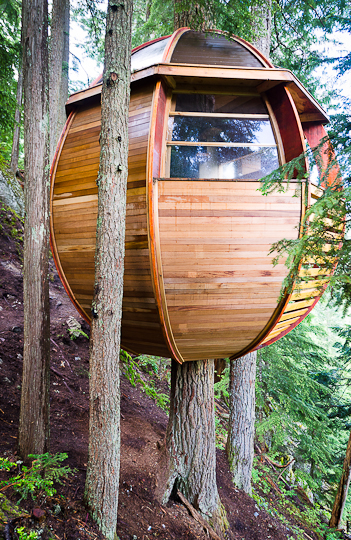 There is no answer. I turn the knob, surprised by the sturdiness of the construction, and I enter HemLoft.

The outside of this remarkable treehouse is impressive, but what I find inside transforms this small structure from the object of a curious hunt into something much more… 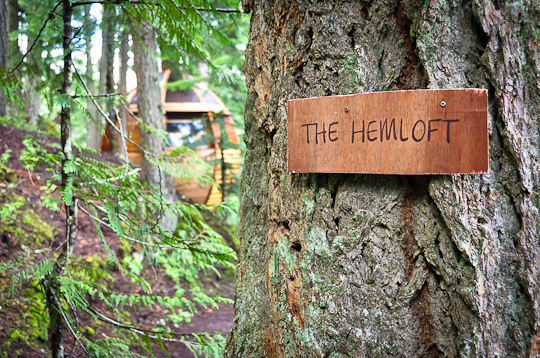 If you haven’t done so, check out Part 1 or Part 3