Gratitude and the slippery slope – Part 2

I may not have suffered any major injury, thank God, but I did have an immediate change of perspective.

I went from focusing on the future – the interminable hour or so it would take us to go the three remaining miles to the lake – to a focus on each second, each careful step across avalanche slopes covered in hard snow.

After we made it across that perilous first slope, each additional crossing became progressively easier. We never lost sight, however, that one slip could lead toward a long slide and a world of hurt or even death in the valley below.

We discovered through that experience that there are two distinct – almost opposing – ways to walk these snowy/icy slopes:

Those of you more experienced with snow hiking will likely laugh at our naïve realization, but this is how one learns.

We made it to the lake which was mostly covered in snow and ice. We enjoyed a brief lunch, grateful for our food, our water and our being there…together and unharmed.

Soon, we were back on the meager trail, passing over the same steep avalanche slopes, careful, yet without our initial trepidation. As my confidence built and as we got to the forested, non-snowy section and the boys raced ahead, I found that my trekking pole was no longer necessary. Worse than that, I no longer wanted to even carry it. 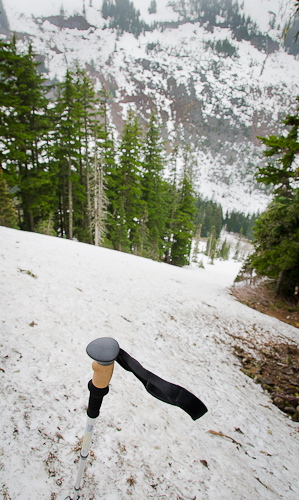 This same collapsible aluminum stick which, arguably, had saved my life earlier was quickly becoming a nuisance. And that’s when I realized it: I’d lost a sense of all the gratitude I had felt just hours or even minutes before.

I quickly went from a moment-by-moment dependency on God and that trekking pole to a self-assured jaunt along the less treacherous parts of the trail. I went from being gratefully present to all that was around me back to how I started: an inward focus on the future and plans for what I would be doing when we returned home.

I likely would have continued in this vein had not I encountered God’s secret anecdote to much of our forgetfulness: other people.

First, I met a ranger racing up the mountain to warn the unprepared away from the slopes and to point the way in the section where the trail disappeared. Next, I met a lone hiker who had moved to the area months before and who complained about how snobby most people on the area’s trails seemed. His gratitude for my taking time to talk, to explain the trail ahead and how to traverse the slopes rekindled my own thankfulness for what we’d just been through.

So as I met others heading up as I went down the mountain, I spoke to them, offering insight, advice and encouragement. In a virtuous cycle of gratitude, we all went our own ways better for the encounter.

Sometimes we are given difficult situations not just for us to overcome, but to learn from and to share that learning with others. And so I did. And in the doing, I remembered what I had come for this day.

I drove home grateful; for trekking poles and trees, snow and snow-covered lakes, slopes and switchbacks, moss and mountains and the One who upholds us in all the ways we so often slip.