The context of wonder

We’ve looked at the issue of retaining the innocence of a child, or at least the wonder of that innocence. But we can learn something else of great value from how children perceive the world, especially when they travel.

Several years ago, I read about a woman who took her four-year-old daughter on a multi-week trip to Italy along with her husband. They visited all the usual locations, seeking to instill in their young daughter an appreciation for history, art, culture and pasta. When they returned home, the mom asked the daughter what her favorite part of the trip was. The girl’s response?

“Playing with that old door knob in our room.” Antique hardware in the hotel in Rome won out over all the splendors of Italy.

When I read that I thought, “A door knob? But then what do you expect? Taking a kid that young to Europe. Some parents!”

I amaze even myself at my capacity sometimes to be an idiot.

Let me elaborate. Shortly thereafter, we took our whole family on a trip to Scotland. Our youngest son Connor was much, much older than the girl. Okay, he was seven. But a lot of development happens in those three years. Or so we thought.

When we returned home, we similarly asked Connor what his favorite thing was about the trip. The multiple castles? The cave we explored where William Wallace hid from the English? The leapfrogging cows? The wonderful, witty people? Our experimentation with haggis? Nope.

“I liked watching SpongeBob SquarePants on the plane all the way over.”

What??? A cartoon marathon on the little screen on the back of the seat in front of you won out over all the amazing experiences in Scotland? Sure enough. And here’s why.

First of all, we didn’t have cable TV at home at the time so his only exposure to SpongeBob was via a few videos he’d seen. Call it suppressed demand if you will.

Second, the video monitor on the plane was itself a marvel. There it was, one built into every seat back.

Third, the monitor was his alone. No big brother to change the channels during his programs. No parents to tell him he shouldn’t be watching so much TV (though we did eventually make him stop and get some sleep).

The novelty of the whole experience is why it stood out. Kids love to stay up late not because of what they do, but because it isn’t a normal event. It’s something special. That’s what this was to Connor, a rite of passage in some ways.

Check out my fancy information graphic here that explains why door knobs and yellow talking sponges made such an impression on these two kids: 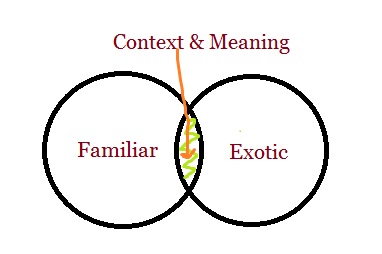 When we hang out in the familiar (the left circle), things don’t stand out too much to us. We’re used to them. Move to the circle to the right, the exotic. Everything in that circle is new. On the surface, that seems good: everything is novel. But that’s also the problem. We don’t know what to do with what we don’t understand.

Only when you have the context to understand the exotic (the overlap with enough familiarity to provide you context) do you have a meaningful experience.

To us adults in Scotland, we knew enough about history and travel to enjoy the novelty we encountered. We could fit or translate all that was new into familiar enough buckets or categories in our minds. We had greater overlap of our circles. With Connor or the four-year-old girl, their context was more limited. So what they did was to find wonder within the narrower confines of their own contexts.

My context is so much broader than theirs. Thus, my capacity for wonder should be all that much greater. But too often I become blind to the familiar and get caught up desperately pursuing the exotic in the hopes of encountering wonder. I cease to remember what children have yet to forget, that wonder lies all around us.

Even in something as ordinary – or as marvelous – as a door knob.