Can a cow really do that…? 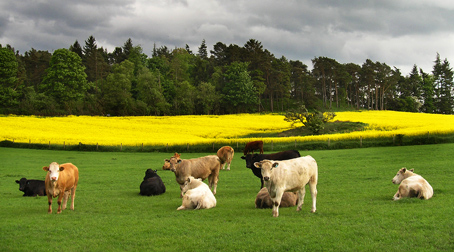 Some Scottish cows in a less amorous moment…

In Venezuela, I encountered the wonder of TV antennas on shacks and moths the size of your face…and no one else seemed to care. Or rather, my parents didn’t appreciate the wonder of these sights the way I did.

So now I’m a parent. You’d think I would have learned from my own past. (I should have a tattoo made of that statement as often as it comes up.)

But no, I’m not only a parent. I’m an adult now. And that means that inevitably on the road to being an adult, something got lost along the way.

We’re in Scotland with my whole family, driving through the countryside. Suddenly, our youngest son, Connor, who is seven at the time, cries out from the back of the mini van we’ve rented.

“Look!” he exclaims. “Those two cows in that field are playing leapfrog!”

We look out the window and witness an act between bull and cow that, in time, will likely result in a baby calf. Immediately, all of the adults – and even our other son who is ten – begin laughing for two reasons.

First, how often do you see large bovine creatures mating? The physics of the act alone elicit at least a snicker if not a full-blown guffaw. These are not small animals, after all.

Second, despite the fact that we have had some preliminary “birds and bees” conversations before now, Connor clearly is clueless as to what is happening and his description of the cows playing leapfrog just adds to the humor.

So as I laugh with all the others, I look back at Connor in the rearview mirror.

And even as I’m laughing, my heart begins to break.

Connor knows that the animals playing leapfrog is a funny sight. But he’s also shrewd enough to know that something else is going on, a “wink-wink-nudge-nudge” edge to the laughter among the adults. He doesn’t understand why and now is not the time to explain it. Or maybe it is and I’m blowing an opportunity. He sits there, smiling, but I can tell that inside he’s feeling something very different.

Most likely, he’s feeling the way I did in Venezuela.

It’s a confused feeling, one where innocent wonder is somehow tarnished or trivialized by others. You know they don’t get what you do. And you know they get something more than you can currently understand.

That’s all part of growing up. But why it seemed so painfully poignant to me is that it wasn’t so much about what Connor did or didn’t gain from that moment, so much as what I had lost.

As an adult, I’m quick with the witty quip: “I wonder if the bull had to buy her dinner first” or “I wonder how the cow says, “I have a headache” in Moo.” I could go on and on. And that’s the problem. Cynicism comes all too naturally to me. What that moment crystallized for me was just how far removed I was from the innocent wonder that Connor expressed when he saw the cows or that I too felt as a youth seeing antennas and giant moths.

That pursuit helps to foster openness whereas cynicism closes us. I mourn that moment for Connor because our reaction led him one step away from openness. I want to reverse that and, on every trip, to choose openness over being closed. To choose innocence over cynicism. To go looking for wonder in unlikely places.

Maybe even in fields with leapfrogging cows.