The loss of something beautiful

I saw an owl lying in the street. 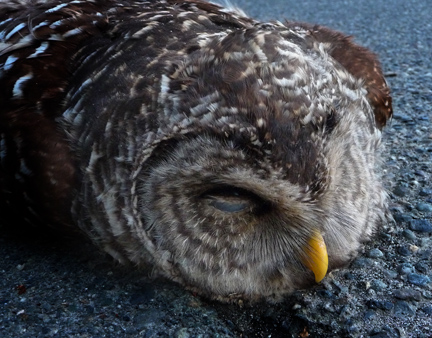 The sighting of the creature had all the earmarks of a classic travel experience:

The intriguing aspect of this travel experience is that it occurred a few days ago on a short trip – a very short trip – a walk just a few blocks from my home.

My wife had seen the majestic bird while walking our dog earlier that day and she told me about it. So I went back to that spot prepared to see an oddity – we don’t witness many owls in our neighborhood. I left, however, having experienced something more.

On the surface, it appeared to be merely a well-preserved if exotic form of road-kill. But that demeans both the stateliness of its appearance and its impact on me. When I got home, both my wife and I surprised ourselves by sharing, almost sheepishly, that the owl caused both of us to feel a profound sadness. I wasn’t sure why our feelings about a dead bird would be so strong.

This morning, my wife informed me that the parents of one of our son’s friends are getting divorced.

As she said the words, I felt exactly as I did a few days earlier when I witnessed the dead owl. And in a moment as crystal clear as it was incomplete, I understood why.

In both cases, I realized I am mourning the loss of something beautiful and magnificent.

I must confess that in the hectic pace of each day’s to-do list, I could easily have heard the news of a couple’s marriage collapsing and felt badly for them. I could have acknowledged it but let it go, chalking it up as just another casualty of marriage in our culture.

The owl, however, in a mystery I’ll probably never fully fathom, softened me and broke me open. Thus, when I heard of the divorce, I reacted not just with shock, but with intense sorrow. I mourn at the passing of something once so beautiful and now lost. I assign no blame: I neither know the circumstances enough nor do I have the right. I simply grieve for a couple that is no longer a couple.

Moreover, I feel this loss today more profoundly not just because of the inherent pain and tragedy of the divorce, but because of a curious incident that has nothing and yet everything to do with today’s news:

I saw an owl lying in the street.