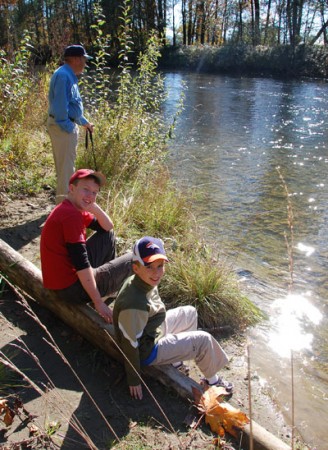 A typical Guys Day: Hanging out in a newly discovered location. It’s not much of a story…except to us.

The most common form of intergenerational travel I experience is one that barely constitutes as travel.

Guys Days are the Seinfeld of travel: we never go more than an hour or two from our house and not much ever happens, at least that you could explain to others.

We have numerous rules for Guys Days such as Rule 43 that says you must never return the same way you came if you can help it. But that’s overruled by Rule 17 which says that all rules are subject to how we’re collectively feeling that day. And that’s mitigated by Rule 81 that says Guys Days are all about what everyone wants except when the guy with the car keys – me – wants to do something else.

In short they are about the experience of the experience itself and the bonds that occur between us by being away for a few hours every once in a while.

And they tend to make for fairly boring stories.

Case in point was our Guys Day trip this past weekend. Here’s a semblance of the dialogue with my wife when we got home to give you an idea of a typical Guys Day.

“How was your Guys Day?” she asks.

“You were going to the museum?”

“Well, we got there before it opened. So we went to Fry’s instead.”

“The electronics store? What did you need there?”

“Nothing. That’s why we went.”

“If you go there when you need stuff – which you rarely truly need – you buy more than you plan. It’s like grocery shopping when you’re hungry. Not good.”

“So you didn’t buy anything?”

“A free (with rebates) anti-virus program since one of ours is expired.”

(Her look that tells me she doesn’t want to know anything more on this subject.)

“So then you went to the museum?”

“Well, it was still too early. So in the same vein, we went to a nearby gallery I’d read about.”

“Not much; about ten contemporary works in a gallery smaller than our family room.”

“That must have been disappointing…”

“No, they were ten very interesting pieces.”

“Oh. So then you went to the museum?”

“I don’t know. We just discovered it by the lake. We never even knew it existed.”

“I don’t know. We discovered it. We didn’t explore it. We’ll save that for a warmer day.”

“So then you went to the museum?”

“No. We were hungry. We all agreed we wanted pizza and we found a place and each had a piece of pizza and a salad.”

“We told ourselves it was.”

“It was good, but it was like $10 per person and that seemed high but since we’d convinced ourselves to go there we agreed it was somehow worth it.”

“You’re either cheap or nuts.”

“Or both. So then did you go to the museum?”

“No. We went to the model train store that was down the street.”

“But you don’t have, or at least the boys don’t play with model trains.”

“So did you buy anything?”

“No. That would kind of defeat the purpose of going there.”

“Hmmm. So then did you finally go to the museum?”

“No. We drove home. We decided we weren’t in the mood to go to a museum.”

“But that was the point of your Guys Day!”

“No. Our Guys Day was the point of our Guys Day.”

She’s far too kind to actually roll her eyes, so she somewhat dismissively smiled and walked away, another successful Guys Day left unfathomable to the outside world.

I used to think of meaningful travel in terms of narrative, stories I can tell people of trips that move and transform me or others. But Guys Days remind me that not all good journeys make good stories. In a good travel story, the traveler is challenged and overcomes obstacles. That’s how we grow as individuals.

But sometimes, we also grow in relationships just by spending time together, time made possible by distance and being away – not necessarily far away – from daily routines.

Well, that is to anyone but those of us who share in them.